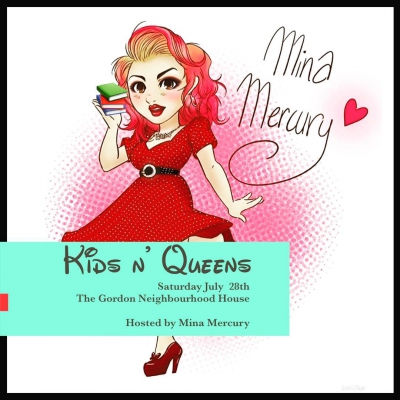 Kids n’ Queens will be held at The Gordon Neighborhood House this year, and will offer more interactive things for kids to do such as a Mina Mercury coloring area, a dress up area, a face painting area and a story telling area.

Kids will take home a book that celebrates the diversity of West End families for free, as well as some cool new Mina Mercury stickers and a Mina coloring sheet.

From her 1996 Vancouver debut, Mina Mercury has been reinforcing her passion to personify male & female icons; Madonna, Annie Lennox, Michael Jackson, Gwen Stefani, Alanis Morissette, Prince & Bjork. Also playing characters such as Cruella DeVil, Pee Wee Herman & Edina from Absolutely Fabulous. She has had the opportunity to co-host Madonna’s Rebel Heart Tour VIP party and performed in many fundraisers. Mina loves giving back to the community; hosting Bingo for Life, performing in Shine 2017 as well as Shine 2018 and RED 2017, Mina also has been featured in both Legends Calendar for 2017/2018 and 2019. As a member of the Tuck Entertainment Queens, Mina has had an incredible opportunity to perform at amazing corporate events as well as local Vancouver Pride Society events and functions. Mina continues to move forward in the Vancouver drag scene with some amazing up and coming projects.