Following on its debut in New York City, homegrown documentary Sochi Pride will be making its Vancouver premier next Tuesday, July 19 at The Junction (1138 Davie Street) in the Davie Village.

LGBTQ2+ rights are front and centre in this documentary on the Canadian perspective of the 2014 Sochi Olympic Games and anti-gay laws exposed in Putin’s Russia. 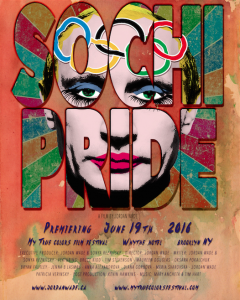 Directed by Jordan Wade (pictured, above left), the 30-minute documentary was filmed in Vancouver, Moscow and Sochi, and features a diverse cast of academics, athletes and politicians including Councillor Tim Stevenson of the City of Vancouver.  Despite fears of homophobic violence, Stevenson went to Sochi on the city’s behalf ahead of the 2014 Olympics to appeal to the IOC on it’s commitment to human rights and a more inclusive games.

The film had its worldwide debut in New York City at the My True Colors Festival last month.

The event will also double as a fundraiser for Real Rio. A recommended $10 donation will help Sochi Pride filmmakers Jordan Wade, Sonya Reznitsky, Kevin Hawkins and Arman Kazemi launch their next platform as they head to Brazil to document the cultural impact of this summer’s Olympic Games in Rio de Janeiro.

Due to the hyperlocal content of the film, the upcoming Vancouver Pride festival and the Rio Olympics right around the corner, The Junction on Davie Street will be the perfect meeting point to host this special evening, with a Q&A with the producers.

This will be an opportunity to share a dialogue around tolerance and human rights, and the role independent filmmaking can play in aiding this process.

Mark you calendars for July 19! Doors open at 8pm, and the film begins at 9pm. For more information, check out their website.