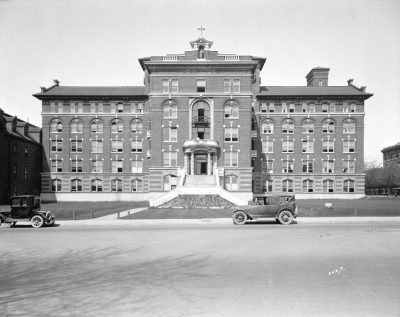 With Providence Health Care’s proposed relocation of St. Paul’s Hospital to the False Creek flats, the future of St. Paul’s at 1081 Burrard Street in Vancouver’s West End is once again uncertain. 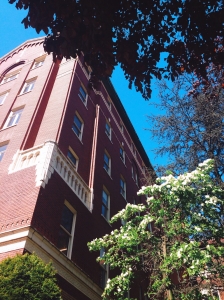 At the time the West End was being populated, Mother Joseph of the Sacred Heart, an accomplished carpenter and reputedly the first woman Architect of the Pacific Northwest, designed and constructed the original 1894 St. Paul’s Hospital on a piece of wilderness land.

In the Edwardian-era boom of 1912, the original building was demolished to make way for a new structure finished in the Renaissance Revival style with a cross shaped floor plan.  The 1912 Burrard Building and its two wings, added in 1930 and 1939 are today of particular historical value. St. Paul’s Hospital is listed on the City of Vancouver’s Heritage Register as an “A”, the highest level of heritage significance.  It is however, not a designated heritage building and is not protected by legal statute.

On several occasions, the community has clearly said it is important to maintain a hospital at this site to serve the West End and the Downtown peninsula. It was no surprise when the community expressed this sentiment regarding Providence’s latest proposal to relocate St. Paul’s Hospital.

We know ‘saving St. Paul’s’ was a passionate project for Jim Deva and countless others in the community. We encourage others who feel strongly about St. Paul’s to share their views and their stories with us on our Facebook page or by email at info@westendbia.com.