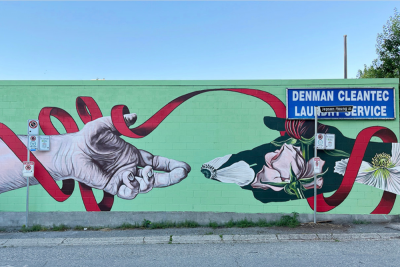 As part of our continued partnership with Vancouver Mural Festival, we have created three new murals in the West End this summer with a focus on our Denman Laneway Project to honour the important figures they are named after, and as such we will see Jepson-Young (1075 Denman), Rosemary Brown (830 Denman) and Ted Northe (958 Denman) come to life through the creative visions of three talented local artists: Kirk Gower, Matt Hans Schoeter and Sade Alexis. 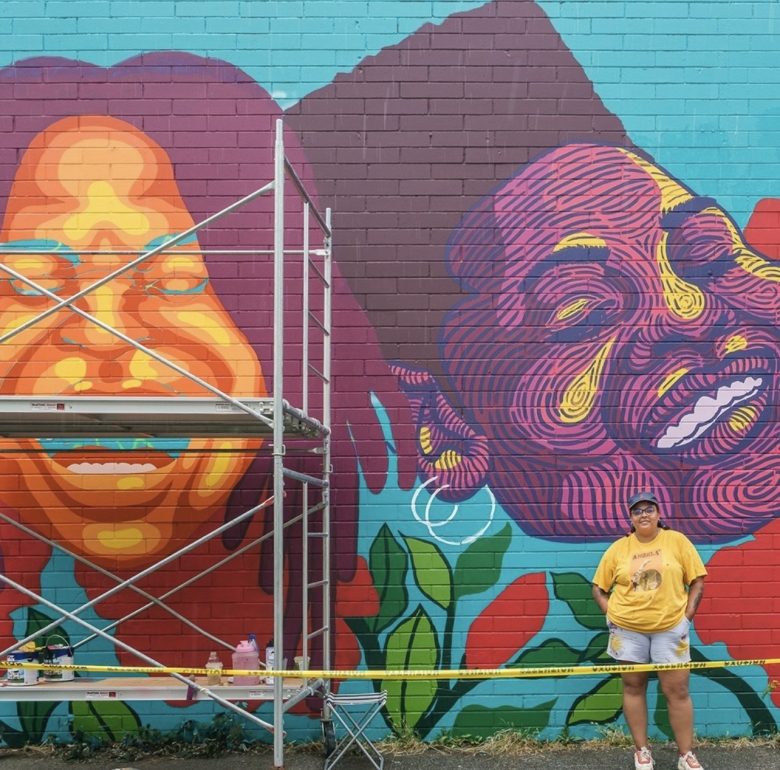 Artist Statement: “Thank you, Miss Rosemary” was created to honour and remember the work of Rosemary Brown. Miss Rosemary worked to uplift and celebrate the lives and experiences of Black women in this city. As one of the first politicians in this city to discuss the complexity of being both a Black person and a woman, she was one of the first to discuss intersectionality within the context of Vancouver.

This mural calls attention to the most important work that Miss Rosemary did, cultivating community and joy for Black women and femmes. This piece is about joy, using bright colours and playful patterns to depict carefreeness shared between Black women and femmes. It is about the community that joy can bring about. It is about the beauty of Black laughter and the boisterousness of Black Womanhood. The floral elements call to the shared m experience of being from the islands, as Alexis’ paternal family is from Trinidad, and Miss Rosemary’s homeland is Jamaica. Alexis utilizes hibiscus flowers to signify shared Caribbean culture and the shared experience of Caribbean diaspora within Vancouver. 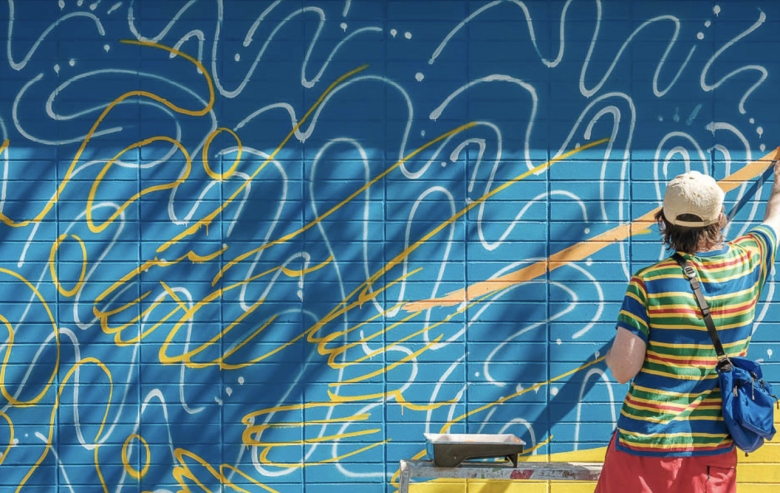 I am a human being
Artist: Matt Hanns Schroeter

Artist statement: This mural depicts Ted Northe, an influential gay-rights activist and drag queen, extending his arms out to a community of hands matching colours representing bands of the Progress Pride flag. He helped organize protests and fostered community building since the 1950s, contributing to the structure of LGBTQS2+ policy and rights in Canada, including the decriminalization of homosexuality on June 27, 1969. With this mural, Matt wanted to show Ted Northe’s personality and energy passing through to the community. His hands form a cloud of unique shapes forms Matt uses often uses in his work to communicate our unique identities. He hopes that by seeing this mural, people can remember Ted Northe, and get inspired to learn more about ongoing LGBTQS2+ activism in Canada.

Artist Statement: In his CBC series, the “Dr. Peter Diaries”, Dr. Peter documented his battle with AIDS and humanized the epidemic for many Canadians. Before his death in 1992, he founded the Dr. Peter AIDS Foundation creating a place where people with AIDS could receive compassionate care right through to the end of their lives. Today, the Dr. Peter AIDS Foundation is one of the world’s most recognized care facilities for HIV/AIDS. Throughout his life, Dr. Peter worked ceaselessly to sow seeds of compassion. Kirk’s mural uses symbolism to dive into this subject matter and approach the idea of compassion more abstractly. Wrapped in a red ribbon (a universal symbol for AIDS awareness and support), an open hand reaches outward to lift someone. Across from this is its mirrored image, blocked out in a dark green shadow-like form. In the shadow, the form sprout flowers representing the beauty of compassion. Thus, they are a symbolic representation of the seeds of compassion sewn by Dr. Peter blossoming today.

Dive into the culture of inclusivity and prideful diversity that the West End holds by connecting with the murals across the West End’s Laneways. Pioneering women, 2SLGBTQ+ activists, and HIV and AIDS educators are among the local historical figures celebrated in the naming of the eight West End laneways. Artists have responded to this rich history through the murals explored in this tour.