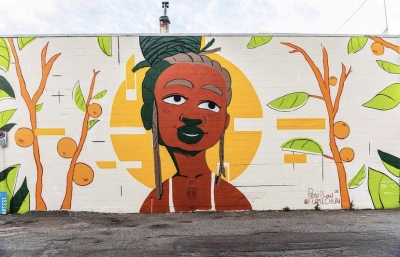 Known for championing a culture of celebratory inclusivity and prideful diversity, the West End has long held an important role throughout the city’s socio-cultural landscape. Davie Village is the epicentre of this space, home to a variety of great boutiques, eateries, and clubs. With its rainbow crosswalk and colourful laneways, the West End is a feast for the eyes. Having one of the most diverse populations in Vancouver, the West End’s strength lies in its open and supportive community.

Immerse yourself in our vibrant neighbourhood while visiting our eight VMF murals, four of which have been painted for this year’s festival. Here’s where to find them. 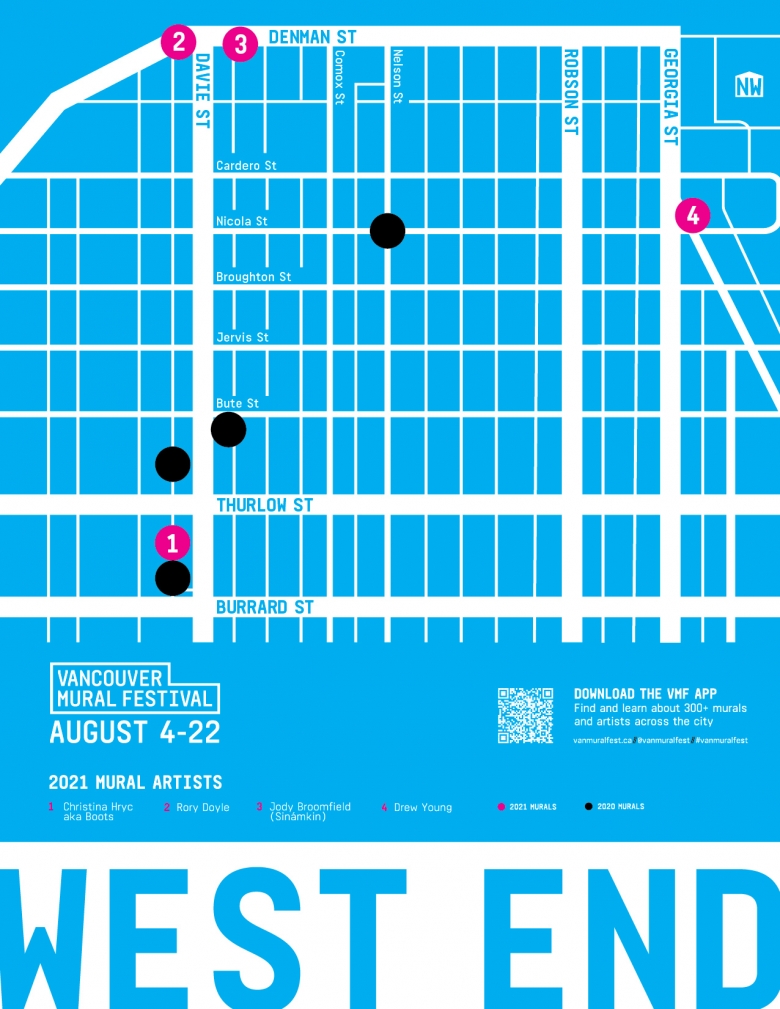 Artist Statement: This project is a love letter to Davie Village and the West End. It’s a visual celebration of a community with enough heart to embrace all aspects of the diverse rainbow that resides in Vancouver. The piece is heavily influenced by the early work of John Waters and features drag icon Divine. My goal was to create a mural that embodies flamboyance, outrageousness and celebration, with a gentle nod to our history.  I wanted to create an anecdote about embracing individuality and authenticity. Like queer culture, love is fluid, limitless and selfless-it can never truly be defined.

Artist Statement: Horae is about the cycle of the seasons and how its inhabitants are affected by them. The composition mimics a gallery setting to direct focus to each season individually; highlighting the different and common behaviour of the subjects. This piece is situated along Pantages Lanes, which is named after Peter (Pete) Basil Pantages (1901- 1971) who founded the century-old Polar Bear Swim at English Bay. As opposed to inhabitants depicted through this mural, Pantages was undeterred by seasonal changes of our city and reportedly swam every day of the year, even on the coldest days. Pantages’s unwavering habits have inspired many to take the cold annual swim every New Year. 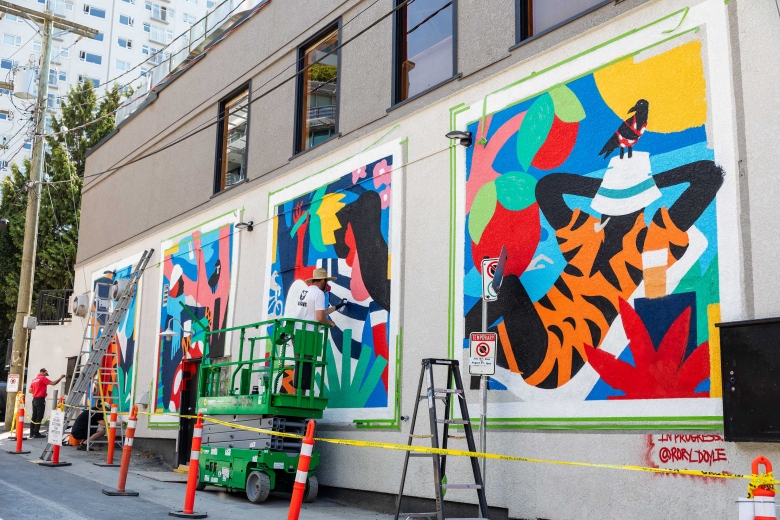 Artist Statement: This mural design takes place many years ago and prior to contact in the area known as English Bay. With the watchful Thunderbird in the sky, our ancestral relatives see-off canoe paddlers in their sea-going canoes as they leave the nearby village of Senakw to journey up and down the coast of the Salish Sea and trade with the villagers there.

Artist Statement: A unity between architecture and nature, isometric angles and organic forms reflect the tension that anchors our modern metropolis to the earth. Deliberate angles in the flow and cadence of the florals draw from the future of Vancouver architecture. The relationship between contemporary design and nature unfolds through the fraternal twin characteristics of the magnolias – a relationship that mirrors, shifts, and continuously develops.

Propagated from The Bathing Dyad, the Arboretum reflects and rises the parent design, acting as a lush extension of ethos and aesthetic.

Artist Statement: Black joy is so important to see because not only is it revolutionary, it is extraordinary, and beautiful. I wanted to paint a Black woman exuding joy, in all her glory, in front of a deconstructed sun, surrounded by oranges on branches. Oranges have many meanings, but the ones that resonate with me are Joy, Happiness and Prosperity. Through my lens, I hope to showcase a form of Black joy that is beautiful to me, and how even in a world that doesn’t support us, we still bloom and grow, like precious fruit. 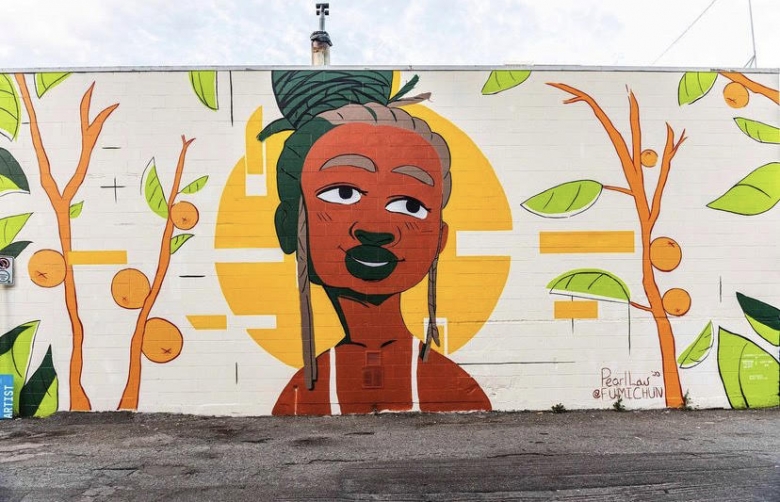 Artist Statement: My mural is part of the Davie Village Pride festival, and so my painting is a celebration of the multitudes of identities that are part of the LGBTQ2S+ community. The piece depicts a non-binary and trans-feminine couple, whose ethnicities are as complex as my own.

Artist Statement: This art piece depicts two Coast Salish thunderbirds surrounding a human figure in the middle. Thunderbirds are symbols of power, protection and strength. The supernatural powers of the thunderbird spirits come to help the people and they provide spiritual protection. When they flap their wings, thunder and lightning strikes. It is said they can take human form, and when they do they lift their heads up as shown in the design. The human in this art piece represents Two-Spirit people because they bring special gifts to the world and offer spiritual medicine to the people of this earth walk. Because Two-Spirit people are non-binary, they bring a balance to the world that would not otherwise be present. The combination of thunderbird and Two-Spirit people represents transformation. Their healing powers are very much needed on this earth. 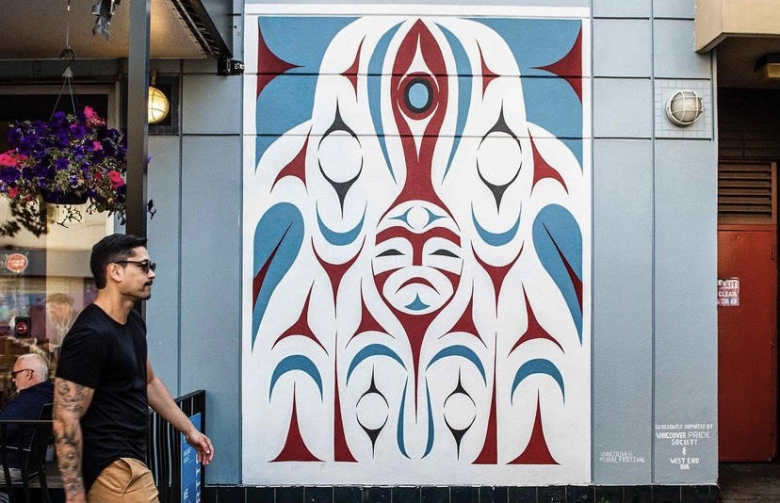 Artist Statement: Designed by Annie Chen (LEMONNI) and Carson Ting (Chairman Ting), this mural is inspired by the history and nature found in Vancouver’s West End. The piece features Joe Fortes, a prominent Vancouver resident (our city’s first official lifeguard) and animals found in the local ecosystem. The West End is a wonderfully rich and friendly community home to residents of all cultures, backgrounds, and professions- we hope to represent and bright up our neighbourhood through colour and fun imagery in this mural.